- June 11, 2020
It sounds strange, but Mexico has great sushi. Some of the best I’ve ever had, I think. Lots of fresh fish and best of all, they use cream cheese as an ingredient. Pretty fantastic. Salmon and cream cheese make a great pairing. Also, it turns out, when you exclude the ingredients that makes them ‘sushi’ - the rice and the nori (seaweed). Like this version, that fits right into the low-carb, high fat Keto diet. 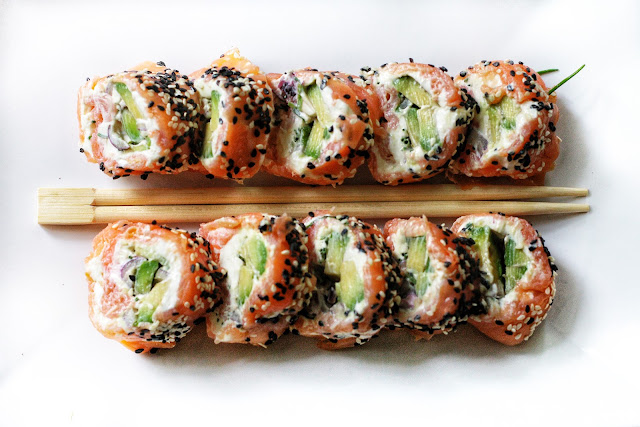 * This works really well with a combination of cucumber and carrot too. Or mango. Just make sure they’re cut into long thin strips and line them up along the centre with the avocado.

Need:
A sheet of plastic foil and a sushi rolling mat

Instructions:
1. Spread a piece of plastic foil over a sushi rolling mat. Take the salmon and spread it, slightly layered, over the plastic in a rectangular shape, the long end of which is lined up in the same direction as the bamboo of the sushi rolling mat.

2. Spread the cream cheese over the salmon.

4.  Now roll it up. Take the plastic and fold one end of the salmon over the middle ingredients using your rolling mat, then roll on over the rest of the salmon until you get a nice round roll. Place in the fridge for a few hours or over night to let it set.

5. Unwrap it and sprinkle the sesame seed over. Serve with a wedge of lemon to sprinkle over and some low-sodium soya sauce for dipping. 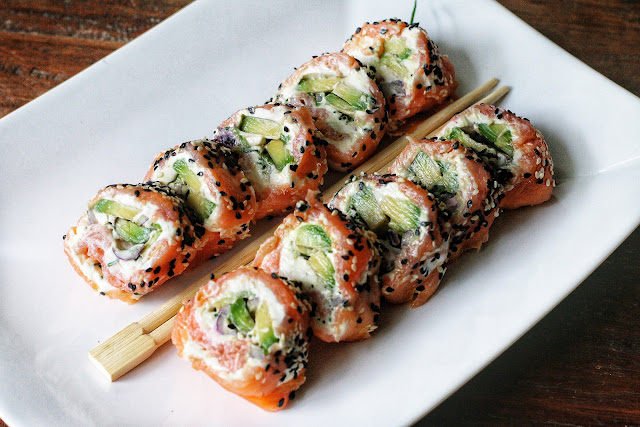 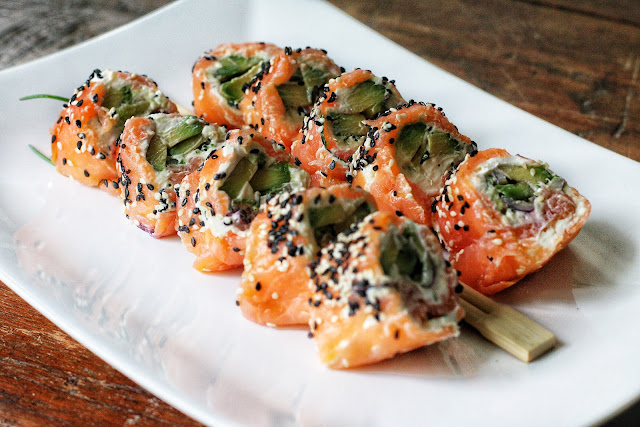 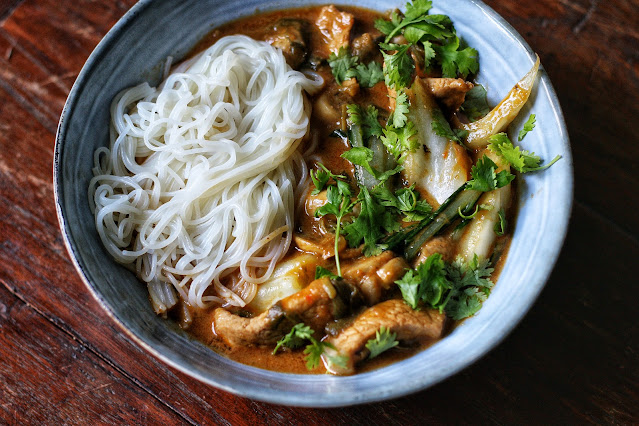 After a long spiel of Italian and Western dishes, I’ve been drawn to Asian lately - from stir fries to curries. Two of the ingredients I’d bought to play around with were bok choy and pork. After testing them recently in a Chinese-inspired stir fry, today I decided to go Thai and try them in a curry recipe that originally called for mini corn. The result was simple but intensely flavourful - and although I’ve been eating something different almost every day, this is definitely going down on my repeat-list.  Ingredients (serves 1): 120g pork, sliced along the grain 65g mushrooms, sliced 1 large leaf bok choy, roughly chopped 2 scalllops, diagonally sliced 1 tablespoon Thai red curry paste 2 teaspoons smooth peanut butter 100ml coconut milk 100ml water 1/2 tablespoon Thai fish sauce 1/2 tablespoon soy sauce 1 tablespoon vegetable oil 1 teaspoon soft brown sugar stalks and leaves of 1/4 bush cilantro, stalks finely chopped and leaves picked Juice of 1/2 lime Serve with white rice or Thai
Click to read the rest of this post » 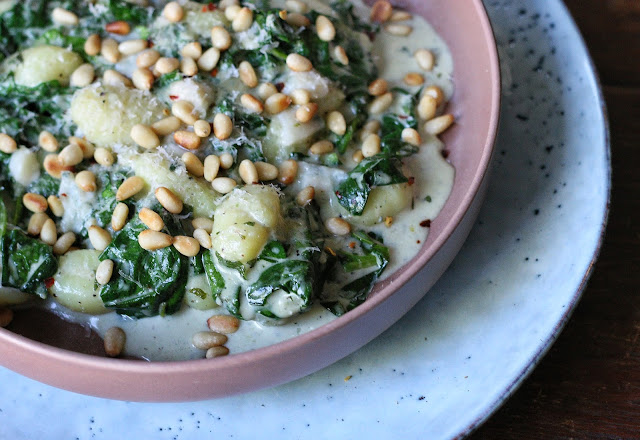 The first time I had gorgonzola and spinach together was when Paulijn, a former housemate, made me gorgonzola spinach pasta - about a hundred years ago. At the time I wasn’t very experimental when it came to food, and I was not a fan of gorgonzola. Too blue, too strong, too smelly. I was decidedly sceptical, but tried to be well mannered and keep my mouth shut about it. And glad I did, for what she made wasn’t strong or smelly at all. What I learned that day was not too judged too quickly - ingredients change when you combine them with others, and things you never thought you’d like may surprise you in all kinds of wonderful ways. I also learned that spinach and gorgonzola make a lovely pairing. Here’s a lovely gorgonzola spinach gnocchi recipe, adapted from Brandy at Nutmeg Nanny.  Ingredients (serves 2): 250g gnocchi 1 shallot, thinly sliced 120ml cup heavy cream 120g crumbled gorgonzola cheese, plus some for topping 85g fresh spinach 1/2 teaspoon fresh oregano, minced
Click to read the rest of this post » 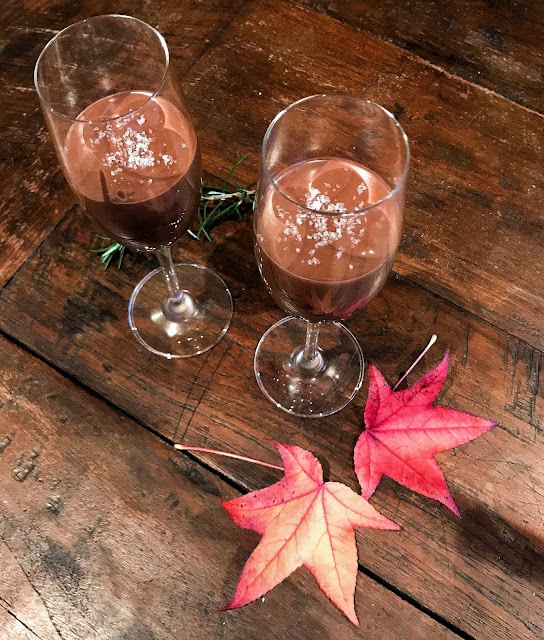 There are few desserts that will make me as happy as a good chocolate mousse, so you can imagine my delight when I figured out I could make it myself. This recipe has been my rock for over ten years - and it’s so good I’ve felt little need to tweak it over time. It’s a slightly surprising, egg free chocolate mousse, inspired by an Allerhande (the Netherlands’ largest grocer’s free recipe magazine) from way back when in 2006. The rosemary, the tingle of salt - it’s a hit every time. Ingredients (makes 4): 2 sprigs of fresh rosemary 150 mL milk 200g dark chocolate, in small pieces 250 mL whipped cream 100g white castor sugar 1 teaspoon coarse grains of sea salt pinch of regular table salt NB: If you're cooking for 2, don't halve the quantities. Just make it all. I promise, you’ll be happy you did. Instructions: 1. Remove the needles from the rosemary. Place in a pot with milk and bring to a boil. Turn off the heat and allow the mixture to sit for a while. In the
Click to read the rest of this post » 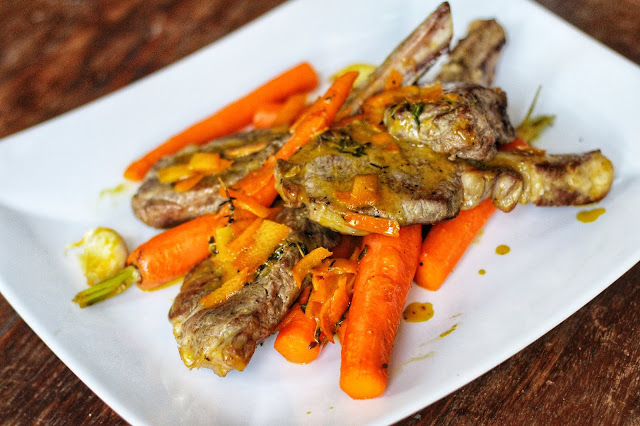 In the midst of this crisis I’ve been making extra effort to support our local stores. These days, I   do most of my produce shopping at smaller shops instead of the supermarket. Far more often than I used to, I go to Turkish shops - which have surprisingly good produce and delicious, much more affordable lamb than I can find at the supermarket. And so I came home with lamb chops - again. The next challenge was to find a recipe. I’d made this one once before, but all my pictures failed. So to share it with you, I had to try again. Not that that was something to be sorry about... :)  Ingredients: 6 lamb chops (about 600g in total), french trimmed 200g mixed colour baby carrots (out of season here, so I stuck with orange) 3 oranges 8 cloves garlic, unpeeled 15g thyme (about half a bunch salt and freshly ground black pepper olive oil Instructions: 1. Score the fat of the lamb chops, and season them with salt and pepper. Then line them up like a rack, so that the fat i
Click to read the rest of this post » 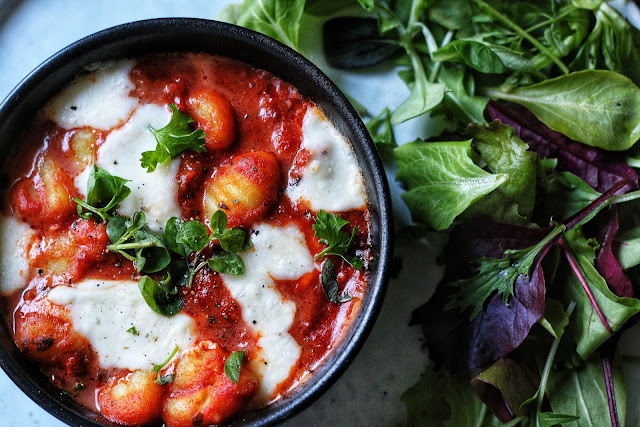 Ready made gnocchi is just about the fastest dish you can make. That’s what’s so amazing about it - it’s fast, and almost always good. I have a couple of white sauce gnocchi recipes up on this site - like my pastas I have a penchant for cream-based over tomato-based sauces, but today I decided it was time for a red sauce. So I made this gorgeous, super easy chorizo mozzarella gnocchi. Ingredients (serves 2): one 125g ball mozzarella, torn into shreds 60g chorizo, diced 1/2 onion, finely chopped 1 clove garlic, minced 300g gnocchi 400g tomato sauce 1 teaspoon basil 1/2 teaspoon oregano 1/2 teaspoon sugar freshly ground black pepper 1 tablespoon fresh mozzarella and oregano, chopped, plus a bit extra to garnish Instructions: Preheat the top grill function of your oven. 1. Toss the onion and garlic in a saucepan together with the olive oil and heat for about 5 minutes until softened. Add the chorizo and cook for another 5 minutes. 2. Add the tomato sauce, sugar and
Click to read the rest of this post » 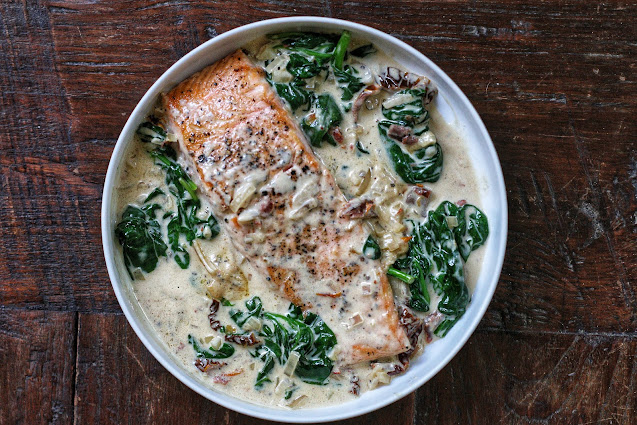 I couldn’t believe it: two milestones coincide today. This post is both the 100th recipe on this blog, and at the same time, the 60th recipe in the 60 days/60 recipes lockdown sequence I started March 16th. I’m a little humbled, and incredibly grateful. This project has taught me so much - I’m getting better at flavour combinations, starting to understand herbs and learning to cook with ingredients I never even thought I liked before. I can now poach an egg cook a salmon steak to perfection. I have been eating better than ever.  All these are very reasons to continue this experiment a little while longer. So I’ve set the next mark at 90/90 - 90 days/90 recipes. But first, today. And today, of course, calls for an amazing recipe. This salmon steak, perfectly tender in a beautiful creamy sauce, was absolutely irresistible. I hope you enjoy it as much as I did.  Ingredients: 2 salmon filets, skin removed 1 shallot, finely chopped 2 cloves garlic, finely sliced 60g sun
Click to read the rest of this post »